Running the Dark Side

Last weekend (April 15 - 17) was the Inaugural Star Wars Half Marathon - The Dark Side at Disney World. Besides the fact that I (once again) wasn't physically ready for it, I was excited to see what kind of characters this race brought out.

My mom decided to sign up Lydia for the 5k, along with her normal Kids Races. Since that race was Friday, they spent Thursday night over at Disney to be ready for the 4:30am wake-up call. They basically walked the whole way, but they had fun. And, really, who expects a 7 year old to run 3 miles? Not us. They got some SUPER cute pictures along the way.

Apparently, toward the end, my mom told Lydia that she needed to run at least a little bit of it. At which point, Lydia bartered running for being able to use my mom's phone to record and take pictures. THAT was entertainment in itself.

They finished in about an hour. Again, pretty decent for walking. Lydia was so proud of herself and her new medal that she took this unprompted selfie..... which I think is the most adorable thing in the world......

That evening, I drove over and met up with them at Magic Kingdom. They'd been there for several hours (after resting up at the hotel) and were having a blast, though my mom's poor ankle was killing her. We hung out for a bit and decided to head back to the hotel to grab dinner.

Before we left, Lydia cashed in on my mom's promise to get her a balloon. It's funny.... we're at Disney so often that we rarely get souvenirs. Usually, it's a stuffed character to add to the collection - all the kids in our life actually do sleep with them and will carry them around to love on. About once a year, she will BEG for a balloon. This time she desperately wanted a "BB-A" balloon, despite the amount of times we tried to convince her that it's BB-8. Regardless, she got the balloon and was happy. 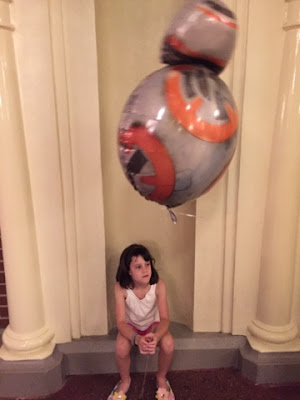 The next morning was the Kids Races. For the first time, Irelynn and Carter were participating. Seriously, the Kid Races are the cutest thing ever. Mom got them all little outfits and prizes.

Irelynn was convinced that she needed to "WIN THE RACE." We told her it was all about having fun and doing her best, but Little Miss Perfectionist was determined. She did, in fact, cross the finish line before anyone in her heat.

Carter just ran to have fun. He really didn't know what was going on, but he was having a blast. 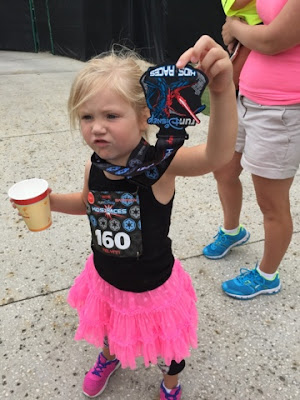 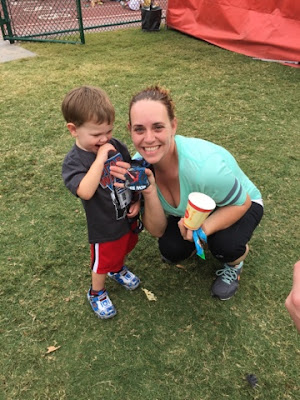 After the races, I picked up my packet. The one thing I was disappointed in was the lack of shirts to swap out. We sign up for these races 6+ months in advance. And, for some reason, the sizing always ends up different. These shirts seemed a little tight, so while there were plenty of smalls to be found, you couldn't size up.

The rest of the day was spent resting and relaxing. Most of the halfs start at 5:30am, so that's what I assumed. However, I learned (thanks to a text from my friend Brianne) that this one was at 5am. That doesn't sound like a lot, but at 2:45am it feels like a lot. We had to be on the buses by 3:30am. Craziness.

When I woke up at the dreaded 2:45, my first thought was, "I really don't feel like doing this, today." I almost just rolled over and went back to sleep. However, it was the very first one, it was expensive, and I don't like the concept of not trying.

The bus took about 45 minutes to get there, so I got a nap in, which was wonderful and helped pep me up a little. I met up with Brianne, who made friends with this guy named Evan on her bus, and they got me a bit excited, too. We stood in line to take a picture with this guy........ 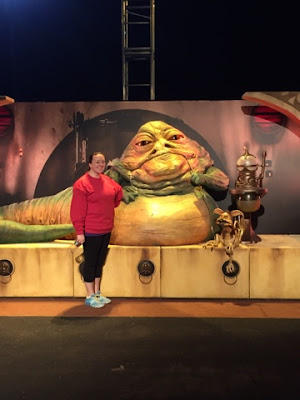 By the time we were done (it was a long line), they were about to start the race and we needed to get to our corrals. I will say that they really made it special. Stormtroopers came out to deliver our mission.... 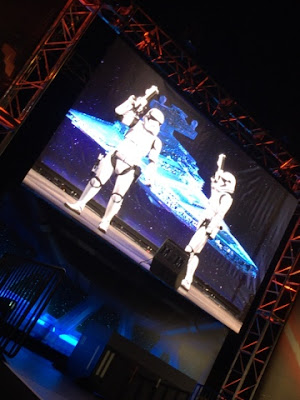 We were still walking out when the first few corrals stepped off. The fireworks display was REALLY cool. Brianne and I were in different corrals, so we bid each other good luck and split up.

Again, the feel of this was different than other races. It really was fun. The played clips of the movies in between corrals. They played Star Wars music along with the fireworks. It was just neat. 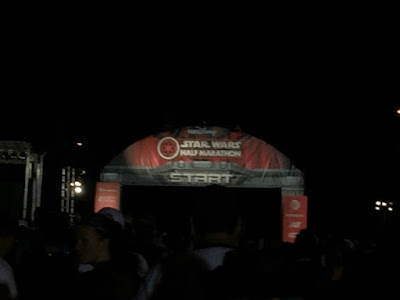 My corral stepped off at about 5:40am. This was a totally different route than other races, so it was neat to have the change-up. There were a lot of hills. And, once you got on the Osceola Parkway (to and from Animal Kingdom), it was a long stretch of boring road. But, overall I liked it. The only thing I wasn't fond of was finishing at ESPN. It was just too cramped and congested. Plus, the entire way to ESPN and then through it you were facing the sun, which was rough.

I got a PR....... for the worst time I've ever done. It was bad. I wasn't prepared. I'm not in shape. And, I just wasn't in the mood to go anywhere on foot for 13+ miles. However, I did finish, so there's that. From what I understand, A LOT of people got swept, so at least I wasn't alone in being unprepared.

The rest of the day was spent showering, changing, packing, and then walking around Magic Kingdom. We ate at the new restaurant, Skipper's Jungle Canteen (or something like that). I *really* enjoyed it and would recommend it.

It's only been a week since the race and I'm already working harder to prepare for Wine and Dine in November. Not only do I want to do better in these races, I need to lose weight, get stronger, be healthier. Hopefully, this time next year, I'll be WAY better off and can take the Dark Side with no problem.

I'd love to do one of these races, but first I we need to get our new treadmill out of the garage and put together:) I want to try Skipper's Canteen but we are not adventurous eaters and the menu sort of worries me. Maybe someday just for a snack.