So last weekend (October 3-5) was the Tower of Terror 10-Miler Weekend at Disney. If you will recall, last year's was my first big race ever. Before I talk about my race, I have to brag on some others.

So, my mom had so much fun watching Megan and I last year that she got amped up and decided to participate. She and my stepdad signed up for the 5K during Princess Weekend. Then, she signed them up for it this weekend AND signed Lydia up for the kids' races. Mom and Jeff really can't run it, because of some former injuries, so they walk. They just like to participate.

The winner went to Baby Aladdin who got about twenty feet from the Finish Line and refused to go any further. His parents refused to pick him up to walk him across the finish (a lot of parents were carrying their kids, lol). Even the media people got into it.

Eventually, Baby A won. The RunDisney people needed them off the track to let the next racers (age 4-6) start. Parent - 0, Kid - 1. I took a ton of pictures during the 15 minute sage (there were several heats), but managed to get an internet friendly one (ie, no faces of the kid)....... 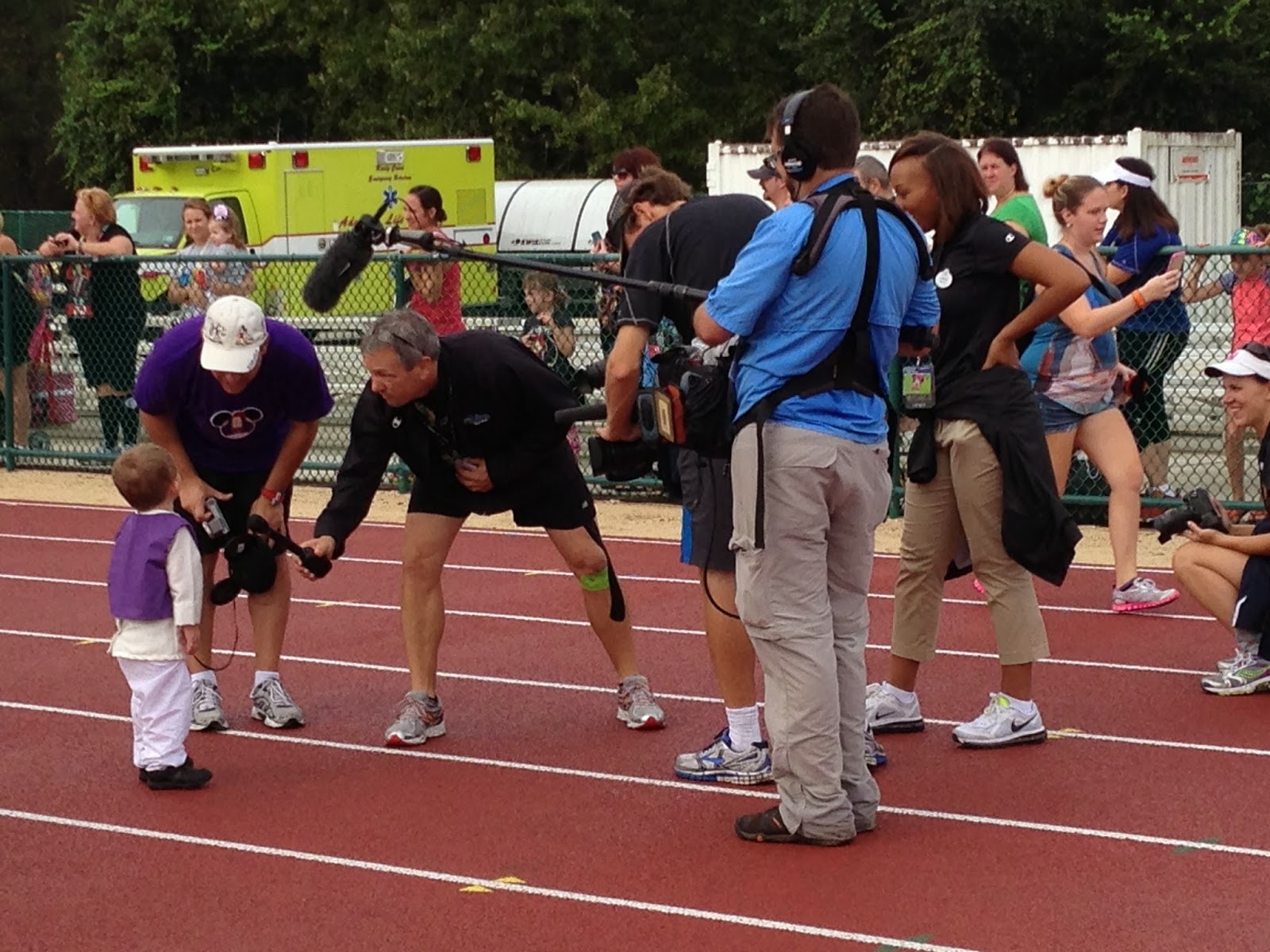 Lydia rocked her 200-meter dash and even convinced Jeff to join her. Next up was a timed 1-Mile race. For that one, she wanted me to run with her. I was wearing flip-flops, so that wasn't happening. I walked near the path for the first half, so that she could see me. At that point, she was comfortable running the rest of the way with the group. Disney security is really tight, especially for the kid races. They don't let anyone leave the race area without a tag that matches the child's bib, so I told her that I would meet her at the Finish Line.

In her words, the race was "HORRIBLE. It was a long and awful race!" But, she liked her medal, lol. 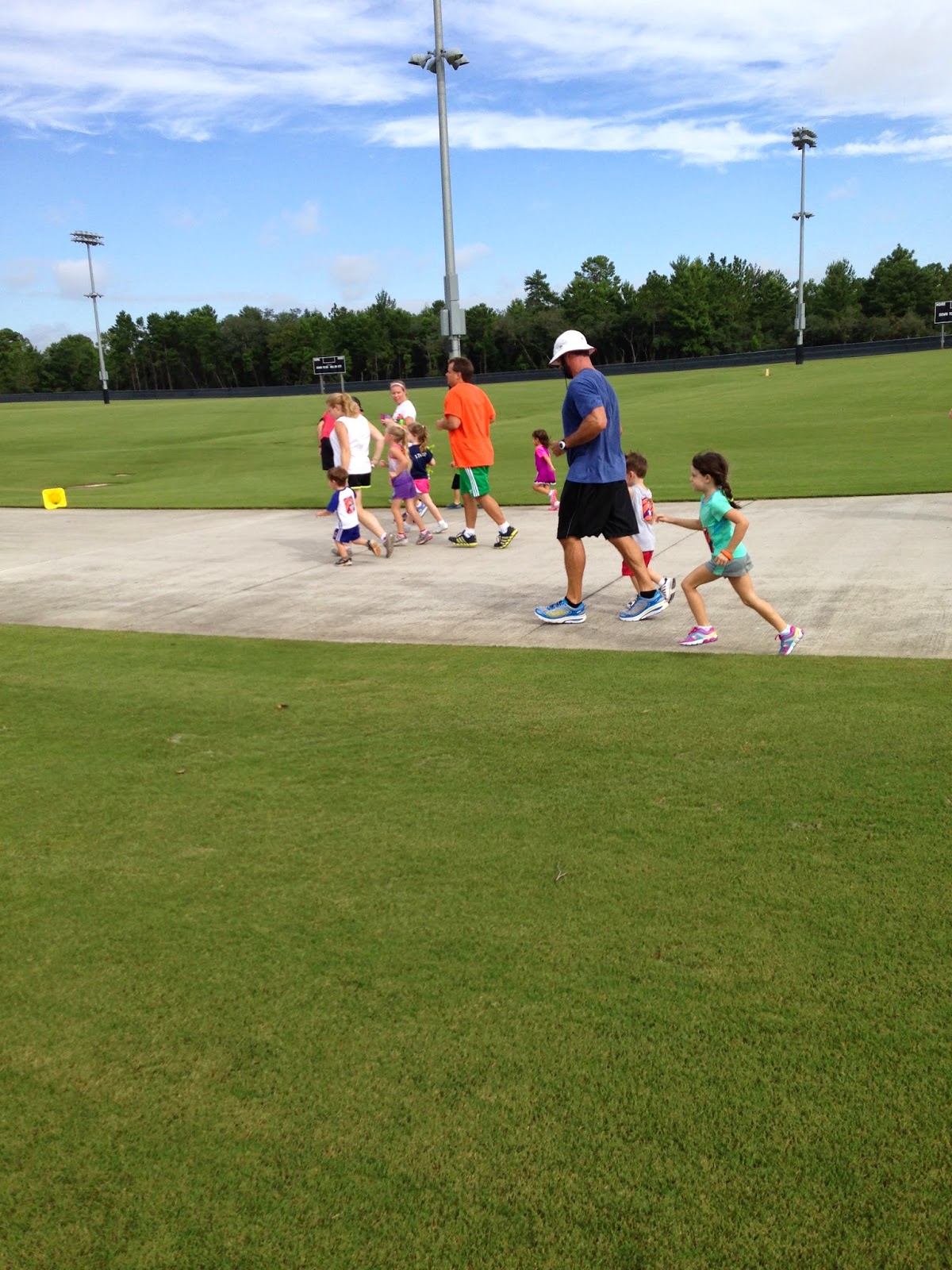 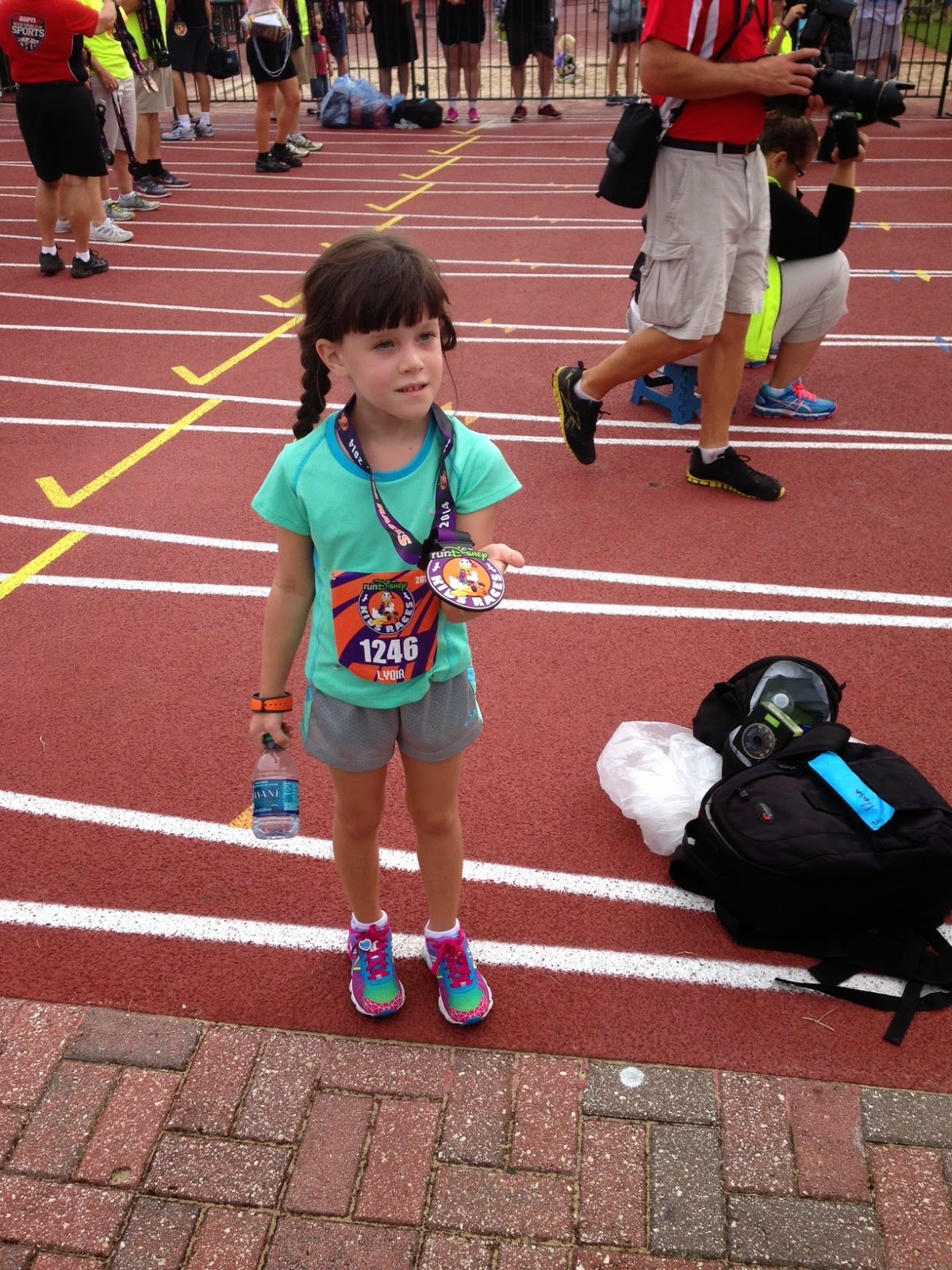 After their races were over (I was getting Lydia ready while Mom and Jeff were doing their race, so no pics of them), I headed back to the hotel to nap and rest up for mine later that night.

Here's where I get real.......... I have *REALLY* let myself go. Like, I weigh more than I have in 5 years. Not a fact I'm proud of, but it's the truth. Not only have I gained 20 lbs since last year's race, but I plain didn't train. I mean, I'd run a few miles a couple times a week, but that doesn't prepare you for something like this. So, I was nervous. I knew I'd finish, but I figured it would take me about 20-30 minutes longer than last year.

On top of that, Megan is preggers and due with the-best-niece-in-the-world on Oct 19th. Homegirl wasn't about to attempt 10 miles at 38 weeks pregnant. My other race buddies also weren't doing this one for various reasons. So, I was solo. SCARY.

We always run by ourselves, but we usually hang in the corrals and start together. You get in your corrals at 9:15/9:30. The race starts at 10pm and my corral started at 10:20pm. So, I was basically chilling by myself for an hour. Heidi came up to hang with me until corral time and to see me finish, but it was still a bit intimidating to just stand there in a crowd of 9500 people and not know a soul.

But, I did it. I tried and I completed it.

As I was trudging along and miserable, I would just try to pep myself up. Thankfully, the weather was gorgeous. Last year was hot and humid. This year, it was the first cool night we've had. 50's and little-to-no humidity. So, I tried to tell myself that at least I was getting to enjoy the weather. Also, when I was in the last three miles and could only jog about 1-2 minutes at a time before having to walk, I really had to give myself a chat..........

"Jess. You are trying. You've completed 7-8-9 miles and you are still trying to jog. THAT is an accomplishment."

Eventually, I did finish! And, I was completely right...... 21 minutes behind my time from last year. 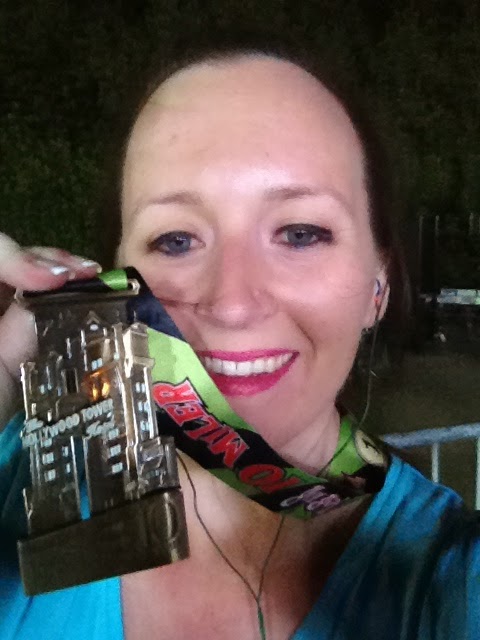 Heidi was super proud and supportive. I was really thankful to have someone at the end.

Ironically, I wasn't nearly as sore as I was last year. I mean, I was sore. But, it didn't last as long or as bad as last year.

How am I going to keep myself from going down that nasty 'Wingin It' rabbit hole? Well, it does help that these races are close enough to have something to work for, but far enough that I can train reasonably. I'm doing a HIIT Running app three days a week (started Week 1, Day 1 today) and then one longer run (starting at 4 miles and working my way up). Plus, I'm throwing in T25 for strength, speed, and agility.

I *know* I can do this. With the exception of my longer runs, I shouldn't be working out more than 1 1/2 hours a day. Back in my glory days, I was working out double that some days.

I'm also trying not to stress about my weight, right now. Of course, I need to work on my diet (those french fries and sweets have snuck their way back into my habits) and I definitely want to lose weight, but I'm trying not to focus as much on that. Right now, my main concern needs to be getting fitter.... faster.... stronger... more endurance. I feel like if I'm mildly conscience of my eating during this time, some of the weight should come off. Once the holidays and these races are over, I can really focus on the weight.

That's the plan. To keep myself accountable, I'll be posting my workouts and progress toward my goals at least every two weeks.

Labels: I Heart Disney, I will eventually be hawt, races, running

I am just so impressed that you made it the whole way! Great job!

Why Girls Are Weird said...