I mentioned that I had an unexpected visitor on Christmas.

The Guy and I have a pattern on holidays. He always texts me the day before...

"Happy Thanksgiving, Turkey. I miss you."

"You better have a Merry Christmas."

You get my point. This time, he didn't. Which I found odd.

I sent him a quick text in the morning. Didn't hear anything. Again, odd.

Later that night, when things had finally calmed down, I gave him a call. It rang once and went to voicemail. I left a message and before I was done, I had a text from him. He was eating dinner with his family. I texted back that I was just calling to "voice" my Merry Christmas and that I'd talk to him later.

Then, he starts getting chatty. Wants to know how I'm doing. Good.

Wants to know if I would be working on Thursday. Nope, off this week.

At this point, I was about 99% sure that he was in town. You see, for years he has said that one day he would just show up. That I'd be working and he would just walk in when I least expected it. I, in turn, told him that he better make sure that I was there, because if he showed up and I wasn't there, he'd be in huge trouble with me.

After letting him play coy for a bit, I finally just asked.... 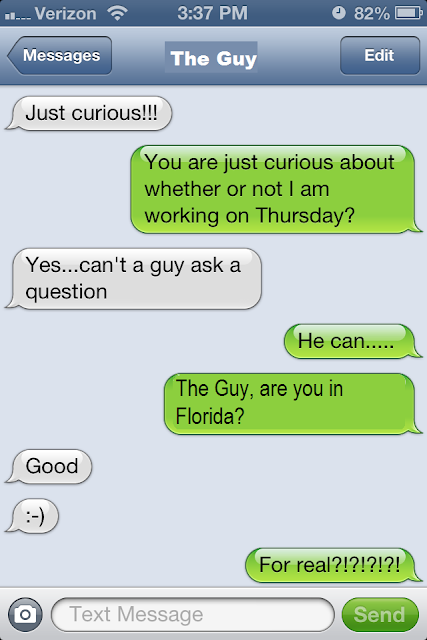 He was visiting family about an hour away and was planning to come "home" when he could plan.

Later that night, he called, we chatted about Christmas, I yelled at him for being sneaky, and he asked me to dinner the next night.

I did end up inviting a couple of his close friends from work who are also close with me. "Mama M" was able to make it, but J wasn't. The two of us had about 30 minutes to ourselves.

I honestly have mixed feelings........ part of me was really happy that they got to see one another and the other part of me really wanted the whole time to myself. With M, the conversation was a little more on the surface than it was when it was just the two of us.

Regardless, it was awesome to see him. You all know what went down between us. And, while things have gotten so much better since "The Letter", one never knows what will happen when "texts/emails/phone calls" turns into "face to face for two hours."

It was like a day hadn't gone by, rather than three and a half years. We always had a rhythm about us. It was unspoken and just worked. It is definitely still there. Little things we used to do, we still did. Cute for instance, he used to eat off my plate and in the middle of our meal, he reached over, grabbed food off my plate, put it on mine, and went right back to eating. Didn't say a word.

We were just really comfortable.

Like I said, part of me does wish that I had the whole time to myself, but I'm thankful for the time I had. We had a really nice evening. As we were done, we were out in the parking lot. M was just gabbing away..... he wordlessly grabbed me into a hug and just stood there for a minute, snuggling, while listening to M. It was really sweet and something that was a bit out of the "norm that we used to be."

I'm not sure when I'll get to see him, again, but I do think it will be sooner than 3+ years.

Yay for Christmas miracles :)
Posted by Jess at 8:46 AM

So...are you still being breezy? Have there been any texts?