Fill in the Blank Friday (on Monday)

I saw this on Living On Sweet Tea's blog and HAD to do it, even though it's several days late, lol.
You can check this fun one out The Little Things We Do..... 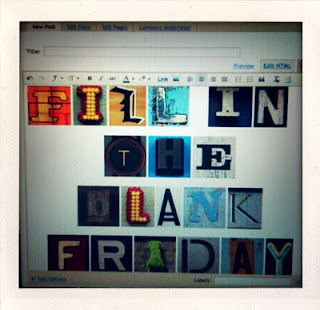 1. One song that always takes me back to my youth is "Barbie Girl"...... we had so much ridiculous fun with that song. Another one is "Mo Money, Mo Problems".... brings me back to cheerleading in the 9th grade, lol.
2. My first concert ever was New Kids On The Block. I was about to turn 7 and it was a couple weeks before my birthday. I was having a NKOTB pool party and gave a security guard an invitation to give to NKOTB. In my innocence, I thought they'd actually get it...... I didn't think they'd be able to come (they had busy lives, after all).

4. The best make-out/"boot knocking" song ever is .... first of all, I think it's hysterical that so many people say that they've never even thought about it before. Anyway, I haven't made out or anything else to it, however, Chuck Wicks' new single (which has yet to come out) is definitely all about the "romance." It's called "Hold That Thought"..... check it out when it comes out.

5. The best concert I've ever been to was ..... you do realize this is IMPOSSIBLE for me to answer, right? I simply can't do it. I will say this......... it's not summer without a Kenny concert (which means sad things for this summer), CC sounds better in person than she does on her CD, Keith Urban rocks, NSYNC was always like Disney World, and Taylor Swift is like Broadway in a concert.

6. A memorable musical moment for me was .... meeting all the people I've met. Also, the surprise acoustic show by Keith Urban at St Jude Seminar, last year. That was awesome.

7. The song on my iPod that's getting the most play these days is "Hey, Soul Sister" by Train and "Love This Pain" by Lady Antebellum. Everytime I listen to my IPod, I listen to those two songs.
Posted by Jess at 10:17 AM

if you like colbie, check out anuhea, she has a similar vibe :)

and I would have gone bananas at the surprise keith urban concert!

Hey, Soul Sister is my absolute favorite right now. My spinning teacher turns it on in class, then watches me go crazy singing to it and dancing on my bike and laughs at me. I love it so much that I don't even care.

New to the blog world. Yours is so cute! Follow us at:
http://peace-love-tbell.blogspot.com/

I'm always jammin to Hey Soul Sister...at first I didn't really like it but now I love it.