Yesterday, I mentioned that I was meeting my best friends from High School for dinner. We were always together in high school. Meg, Ash, Shannon, and I were on the same cheerleading squad, so we were literally with each other for at least 9 hours a day. Mich was with us for 7 of them, lol.
With all of my heart, I love and adore these ladies.
Mich moved away about 4 years ago and we haven't seen her since. She's since gotten married, had a baby, and has her second on the way. When we found out that she and her husband were visiting Disney World, a reunion was a must. It came down to the wire, included some frantic texting, and juggling work schedules but we made it happen.
Sadly, it just didn't work out for Ash to join us :( It wasn't the same without her, but we've already planned to make it a FULL reunion when our 10 year reunion comes next year. And, even though Mich won't be able to make it, the rest of us are planning to meet for dinner once every other month.
Because, we miss one another.
I know I miss them desperately.
There's something about growing up with people that makes them know you like no other. They've seen me gain weight and lose weight. They've supported me when my step-dad died. They shake their heads and say that TG is a fool. They share many of the memories of my past. They hope for my future. They use my super creepy memory to their advantage, instead of thinking I'm just super creepy.
In short, they know me and love me. We know and love each other.
Anyway, Shannon met me at the station and we rode over together. On the way there, Meg called to check our progress, give hers, and ask me which Downtown Disney entrance she should take (my super creepy memory also allows me to have a virtual map inside my mind). Mich and her husband texted to let us know that they were waiting at their hotel for a bus.
Meg, Shannon, and I quickly met up at the designated spot. We hugged and laughed and chatted and checked out the various menus and waited for poor Mich (who was on a bus with the world's craziest and slowest bus driver). Then, Cirque let out and everyone was making way for food. Meg, in her matter-of-fact way, said, "I hope they like House of Blues because I'm going to get our name on the list before every restaurant is packed."
While she was waiting in line, I spotted Mich walking up. We walked quickly and then broke into a run/skip to hug each other. It was SOOOOOOO awesome to finally see her!! Meg joined us and the celebration continued. We decided that it would be a great time to take pictures, lol.
Four out of the five.... the last time four of us were together was my birthday/Shannon's wedding on August 25, 2007. 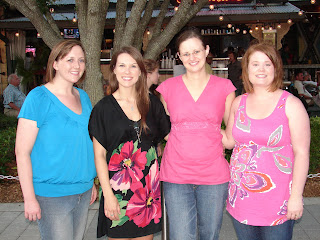 Ever since High School, we've always been a fan of the smush face FB-type pictures... 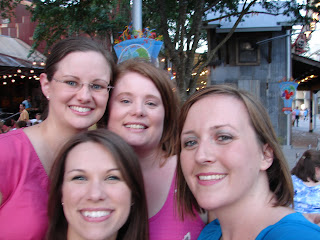 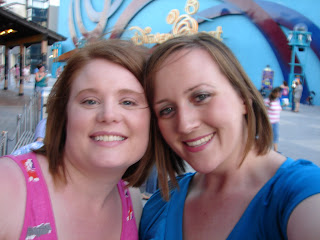 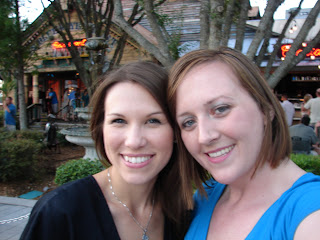 Mich and her husband Jeff (who actually makes you laugh and smile when he says, "Say CHEESE!! Say MICKEY MOUSE!!" 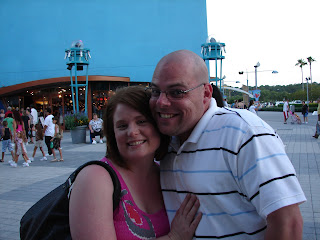 We had some discussion of how these pictures would all go on my blog. Mich and Shannon weren't really aware that I had one. Meg, on the other hand, reads it regularly...... "Oh, yes. I knew when we were taking these that they would show up on her blog. That's why her camera was the only one I was truly concerned about. Because, her pictures go out to the world!"
We waited and waited and waited. We were told 15-20 minutes. About 30 minutes into it, Shannon suddenly is no longer standing next to me and is instead being twirled by a drunk guy. The drunk guy's friend tried to convince us to join him. We declined and then extracted Shannon from Drunk Guy #1. This sort of thing happens to Shannon regularly........ she's not only super tiny, but extremely sweet. When a harmless drunk guy grabs her into a dance (or a sober old guy that I work with hits on her), she just goes with it.
An hour after we originally got our name on the list (a real long 15-20 minutes), we were seated and planning a pig out! Our waiting and dinner was filled with so much fun discussion, memories, and plans for the future.
Eventually, our dessert was demolished (um, hello White Chocolate Banana Bread Pudding ----- I did share, though). It was time to go.
After our final hugs and promises that we would ALL see each other in a year, we went our separate ways.
Until then, at least I have July 22nd to look forward to!!!
Posted by Jess at 11:04 PM

You're right! Nothing better than the people that grew up with you! They just bond to our hearts and never let go, it seems!

Glad you got some time with your girls!

I love meeting up with old friends!!

And you look GREAT!!! Have you lost some more weight?!

There is nothing like meeting up with old friends to make you feel young again!

That's great you were able to catch up with high school friends.. :)