You can grab this from Keely at MannLand5.... 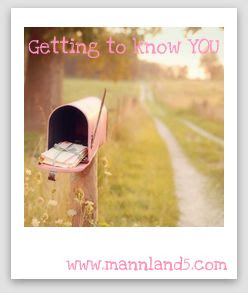 The questions..
1. Are you superstitious?
Not really. I do the whole "knock on wood" thing, as a habit.
2. If you were an animal..what kind would you be?
I tell you what I wouldn't want to be and that's a Beluga Whale. I once saw them at Sea World and thought how boring their lives must be........ they just swim along aimlessly. I know there's the arguement that it's because they are in captivity, but that's not it. There are lots of different animals in captivity that still have personalities. Dolphins have fun, still. But, not Beluga Whales.
That said, I'd want to be a monkey.
3. You would never catch me wearing.........?
A bikini. No one needs to see that.
4. If someone posts a VLOG..do you watch it?
It depends. Sometimes, my computer doesn't like the videos. If it loads without issue then I'll watch it.
5. Have you ever waxed your girlie/manly parts..or any other part of your body?
I have never waxed down there and I never intend to do so. Just waxing my eyebrows causes me to want to punch the lady.
6. Are you a spender or a saver?
A little of both. I'm a really great saver, but I do allow myself indulgences.
7. If you were starring in a movie..who would you want to play your leading man/woman?
George Clooney. Hands down, George Clooney. I don't care about the age difference..... the man is hot.
If he weren't available, I'd go for Gerard Butler.
8. Smoker..never smoked..social smoker..or smoked back in the day?
Never smoked..... I hate the idea that I've even had to second-hand smoke.
Posted by Jess at 3:12 PM


The thing about Beluga Whales had me laughing!! What an odd and awesome observation LOL.

Nair is as far as I could even comprehend when waxing the unspeakable regions ;)

I've never smoked either, i cant stand being in the same building as someone who is. Makes me wanna hold my breath!

My computer sometimes won't play the videos...so I usually have to skip them.