Stories of the Super Mature

We all know by now how mature and brave The Guy is, no?
You remember our texts a few weeks ago when he told me that he was having surgery. And, he didn't tell me when.
Well, through the grapevine, I found out that he basically had surgery a few days after we texted (ever so briefly). I also heard through the grapevine that he was having a REALLY hard time of it.
Part of me wanted to leave it alone....... "Oh well. You could have my support, but you're choosing not to and you hurt me and screw you."
Part of me felt that way.
Then, there's the other part of me that just wanted to tell him that I hoped he felt better. Because, I care about him and don't want him in any kind of pain.
Want to guess which part won?
In my defense, Gina said I could.
I even let her approve of the "Get Well" card before I sent it. Because, I'm cool like that.
I honestly and truly expected no response.
I was ok with this. Again, the only reason I wanted to send it was because I wanted him to feel better.
Back me up on this, Gina.
So, tonight, I logged onto Facebook. A few minutes later, I was working in another window and I noticed the little "You Have A Message" thing flashing at me.
I switched back and saw this............ 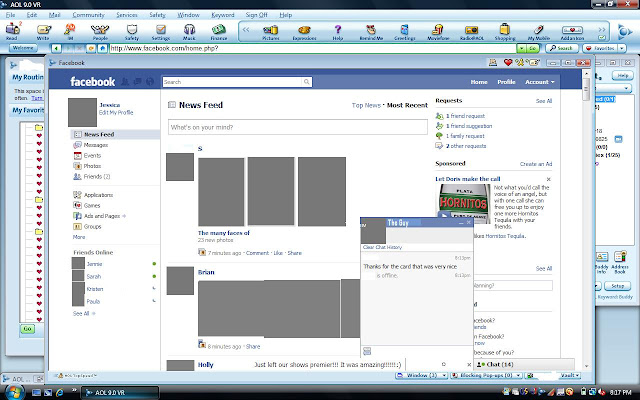 In case you can't read it.......... It says "Thanks for the card that was very nice" and in the exact same minute, he logged off.
So, literally, within three minutes, he logged on, wrote that, and then logged off (or, just put himself to offline).
Because, you know, he certainly doesn't want me to start talking back.
I can only shake my head, at this point, lol.
Posted by Jess at 8:49 PM

Who says men are brave? Pshaw! The Guy is not only stupid for not knowing what he has in you, he's also a chicken!

I am just baffled by this guy....ugh!

But I must admit I enjoyed that you got the Gina Seal of Approval!